Announcing the release of the third book in the E series, Eden, by Kate Wrath: 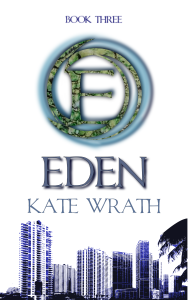 THE THIRD BOOK IN THE E SERIES

Both friends and enemies are keen to get their hands on the information inside Eden’s head—information that could take down the Sentries and change the world. But there are costs that no one realized, and Eden’s not so sure she’s willing to pay them. Refusing to do so could create dangerous problems within the tribe she’s only just come back to.

Eden has her own agenda for learning Lily’s secrets. With hope refusing to die, she’s spurred forward by memories of Oscar and thoughts of finding him again. But Lily’s hold on her is greater than she knows, compelling her to chase after strange clues and confusing visions. With love and longing weighing on her, Eden must determine the reality of her fractured identity in order to decide which path to take. The choices she makes could tear her away from Jonas and Apollon, from everything she’s ever known.

Eden’s future will not be determined solely by choices. Fate has her own cards to play, and they just might take the game.


An excerpt from Eden:

I glance at his face. He's not looking at me, but off down the street, taking in everything in that relaxed sort of way one does when everything is good and at ease. He looks at me now, sensing me looking at him. His smile is so easy. So real and natural. It's the perfect time to ask him, when he's like this. But that would bring all the weight back in. His smile would disappear. Maybe we'll walk just a moment more.

But a moment, and a moment, and a moment. It's not enough of this. When I let all my thoughts go—when I let them float away on the breeze like a cobweb—there's just the filmy sparkle of their passing. And behind, sunshine. Smiles. Something warm and good inside me that I don't want to give up. Yes, there are tuggings and pullings and longings deep within, but if I pay them no attention, I can just be here in this moment. I can just feel what it's like to be smiled at by him.

I sigh and lean into his shoulder as we walk. He murmurs something—some wordless something—an unimportant comment or offhand observation. I feel outside of language, right now. It's the tone that's important. The being.

So we walk, and I drink it all in.

Forever later—an instant later—we find ourselves at one of the warehouses with the trees.

"They're mostly in bloom," he says, drawing me through the door.

Inside is a secret forest of blossom and nectar and sunshine. We walk through the rows of trees, observing their flowers and the occasional fruit. It's a quiet place in and of itself, and our voices are gone for a long time.

There is a single orange dangling off the end of a branch, right at face level. We stop, and I caress it with my finger tips, leaning in to smell it. There is something about that smell. My eyes flutter closed as I inhale, drinking in the perfume of citrus. When I draw back, exhaling slowly, opening my eyes, Jonas is looking at me from the other side of the orange. A soft, soft smile is painted across his face.

And I don't want to let go of this moment. But I have to ask. He knows so much more about everything here, than me. "What can you tell me about oranges?"

His eyebrows go up a touch with surprise. He considers. "They're our main source of trade."

"Yes." I suppose I knew that. But what does it mean?

"...And you like them," he adds. "A lot." He takes hold of the orange and plucks it from the branch, holds it out to me. It rolls off his palm and comes to rest in the cup of his curved fingers.

I look at the orange for a moment, a little chill running up my spine. "Yes," I say again, taking it from him and raising it to my nose. I meet his gaze as I breathe in the lovely smell one more time, smiling behind the orange. "I do."

He laughs and turns away, touching a dangling branch of blossoms from the next tree over. "We used to come here," he murmurs, and though the words are quiet, I hear him well. He glances back over his shoulder at me, and a line has etched itself across his brow. "I wish we had a place just for us," he says. "That wasn't ever anyone else's."

"We have a river," I say, before I know what I'm saying. "And a spot on a raft in the morning, with the sun just rising."

An open-lipped smile stretches slowly across his face. "Next time I take you back there, it will be just you and me on the raft."

Now I laugh and move because I'm blushing and if I don't move I might pass out. And because there's too much pain in this joy. And too much uncertainty.

We walk for the door like we've made an unspoken agreement.

You can purchase Eden on Amazon.
It's also available on Amazon UK and Amazon Canada 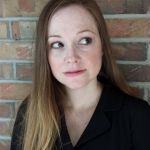 Kate Wrath lives in the Southwestern US. Much like other authors, she has both a [family] and a [pet].

[pet = lovable-but-crazy giant German Shepherd who seems to be able to read, but pretends not to understand when something is required of him]

Kate believes in literature as an art form, world peace, and animal rights, but aspires to write total trash that is full of senseless violence, with characters who eat house pets.

Email ThisBlogThis!Share to TwitterShare to FacebookShare to Pinterest
Topic(s): Books And Magazines, Computers And Internet, Giveaways And Contests, Spotlighting Other Authors

A nice bit of writing there... I enjoyed the "encounter" with the single orange on the tree. Smiles.

I've read the first book in the series, and am looking forward to reading the others, since I really enjoyed the first one.